Locrian: '9 albums for the final epoch' 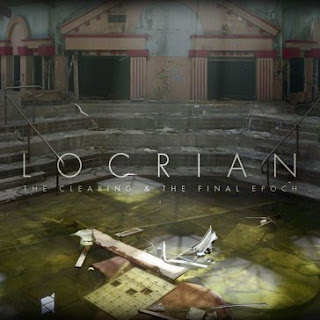 
Vic Chesnutt “At The Cut” – I love this album. It’s super sad and beautiful. This album gives me the chills every time I hear it. It’s no surprise that Vic’s life ended shortly after this was released. It’s not an uplifting album for me, but it’s one of the few albums of recent years that really touches a chord in me.

Anne Briggs “Anne Briggs” – I remember going to see bands play in Toronto and Montreal when I was a teenager and really liking the bands that would face away from the crowd. Something about them made me feel like there was something more authentic about them for some reason. That probably says something about why I like this album so much. There’s just something really authentic about this music. She later disappeared from the music scene. It’s too bad for us and perhaps better for her.

Karen Dalton “In My Own Time” – She was part of the early Greenwich Village music scene. She didn’t leave us with too many recordings, but this one is perfect. Her voice is beautiful and her songs are much more effective to me than her contemporaries in the Greenwich Village folk scene. She hated recording. Apparently her producer had to tell her that the microphone was off in order to get her to play. Some of the best music around. There have been some home recordings of her surface recently and they are also amazing.


Here are three records that have changed the way listen and look at music, please note that this is only three, there are many records, artists, and shows that I have seen and heard that have impacted me in some way or another, but these three really had a powerful effect on me and the way I approach my playing.

Main “Motion Pool” (Beggars Banquet) 1994 - This one of the first “Ambient” records I ever bought. I remember it was the winter of 94’ and I was living in Seattle, I’m not sure why I bought it, I hadn’t read anything about it in any magazine or small press zine’s, I think I was just into the artwork, and that it said “…Drumless Space” on the back (What the fuck did that mean?). During the first listen I was hooked. This record took me on an amazing journey, and still does every time I listen to it. The lack of drums, percussion, or a beat didn’t matter to me at all, all the other sounds that filled the space was exactly enough, not to mention that “lack of” sounds that happen on the record. This release really opened my ears to sound, and the idea of paying attention to what’s in-between the music. I’ve had this record since it’s release, and I guarantee I’ll never part with.

Pan American “s/t” (Kranky) 1997 – I got introduced to this record when I was living in Portland, Oregon back in 98’. I was working at a record store, and a friend/co-worker turned me on to this record. I had just started to discover the music of Chain Reaction (label), and artist like Brian Eno, FSOL, Final, and Divination, which I was enjoying. So hearing Pan American it was like all these elements of this music I was into, condensed into one record, and still holding true to this minimalistic approach and outcome. It was absolutely beautiful, and done to perfection. It was just pure random luck that a few years later, after I moved to Chicago, Mark and I would end up playing/writing music together, and becoming very good friends. As far as I’m concerned this Pan American record is a classic and should not be overlooked.

Supersilent “1-3” (Rune Grammofon) 1997 - I actually didn’t hear this record until 2000 – a friend gave me a copy, he was guessing I’d be into it since at that time I was listening to quite a bit of jazz, free-jazz and electro-acoustic improvisation. After hearing all three discs a few times, I was totally blown away (and confused). I became obsessed with this band for several years, in fact back in 2002 I flew to Dresden, Germany just to see them play because at that time I was convinced that I would never get a chance to see them on US soil. It was a mind altering gig (jet-lag didn’t help either) and it was then that I got to meet Helge Sten, and we ended up working together a few years later when he mixed the first On record (Type Records [reissue]). A few years after that I finally DID get to see them in Chicago. Complete deconstruction and reconstruction by four amazing musicians with pinpoint accuracy. It’s hard to describe this record, but it changed the way I hear and look at improvisational music. I don’t think this is their best recording to date, but it’s definitely stellar. If you haven’t heard it, please hunt it down and give it a listen. After you absorb 1-3 for a few please move on to Supersilent 4 and 6, you won’t be disappointed.


Wolf Eyes "Dread" - I come back to this album often. Its sparse, simple, yet compelling. Dredging a dub sensibility with homemade dread and fear. Everything sounds like it is falling apart, the ring modulators, burnt circuits, the stomping drum machines programmed by sausage fingers, total rhythmic chaos and the rantings of a dispossessed half-insane man burning his house down, letting the smoke rise in a desert of glue. I always thought this was the soundtrack to the Rust Belt states in the United States.

Yes "Close to the Edge" - It made Bill Bruford leave the band (though he went on to join King Crimson and be a force on "Larks Tongues in Aspic"). "Close to the Edge" is so focused, not so disparate as their past efforts, where solid tracks are surrounded by noodling. And that bass tone! So here only three songs, two of which are multi-part epics of serious quality. I think I have referenced this album on almost every Locrian record in our titles and lyrics. Not that I expect anyone to notice. But seriously there were so many good ideas in this record.

Brian Eno "Ambient 1: Music for Airports" - I can say I would probably not even care about synthesizers or tape loops if it wasn't for this album. I had read about this in an interview and then that week saw it in the local record store when I was in high school, just picked it up because the artwork looked enigmatic enough and immediately it clicked. Immediately I got it. I wanted to live in this album. From start to finish. It also made me work backwards towards Roxy Music and all of Eno's solo material and become obsessed about anything Conny Plank touched. I actually listen to this in every airport I am go to, I find it unbelievable how it grows over time. I wish it was installed at LaGuardia still, maybe I should do that sometime.

Posted by Peter Wullen at 7:26 AM No comments: